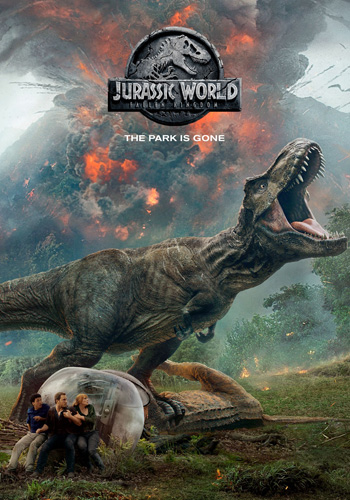 Owen and Clair return to island Nublar to save the dinosaurs from extinction as the island’s dormant volcano becomes active. But during the rescue they find that there are darker motives behind the true nature of the operation.

Three years after the destruction and abandonment of the Jurassic World theme park a mercenary group returns to the island to retrieve DNA samples from Indominus Rex that lie at the bottom of the lagoon. After being attacked by the Mosasaurus and T-Rex they manage to escape while on mainland in a U.S. Senate hearing they decide not to save the dinosaurs from an impending volcano eruption forcing Hammond’s former partner, Benjamin Lockwood, to contact Clair in order to prepare an expedition to transport all animals in a safe environment with the help of Owen Grady.

Upon arrival on the island they activate the dinosaurs trackers at the command bunker and Owen goes to find Blue but is being shot with tranquilizers upon finding him. Claire and Franklin reunite with Owen and all together try to escape the pyroclastic wave from the volcano eruption and then sneak into one of the mercenary ships full of captured dinosaurs. At Benjamin’s estate Lockwood confronts Mills after learning that he plans to sell the dinosaurs resulting in Mills murdering him.

Clair and Owen are captured at the estate but as the auction starts they escape and free the caged dinosaurs. As the group is being hunted by the Indoraptor throughout the estate, Blue comes to their aid. Falling from a glass roof, the Indoraptor is being impaled by a Triceratops skull horns while Mills is killed by a T-Rex and a Carnotaurus. Blue and the rest of the dinosaurs escape out into the world as we see a flock of Pteranodons fly around the Eiffel Tower replica in Las Vegas.

The Jurassic Park franchise had over the years been a real cinematic roller coaster with hits and misses throughout it’s box office run. When the first Jurassic Park came out it took everyone by storm and Steven Spielberg’s epic is considered even today a classic film of cinematic excellence. Unfortunately the next couple of sequels didn’t enjoy the same success as production problems and script rewrites kept them from reaching the same heights the original did. As a result after Jurassic Park III the franchise went into hiatus.

For 14 years the franchise had stuck into development hell as it seemed that multiple scripts had been written with none of them being able to satisfy it’s creators to move forward with another sequel. Until 2015 that Jurassic World came out with Colin Trevorrow this time at the helm and Chris Pratt and Bryce Dallas Howard at the leading roles. The film once again managed to catch lightning in a bottle as everything fell into place in order to create a film that recaptured the lost magic of these extinct animals. The time was right, the script was good, the actors had great chemistry and a director that knew what he wanted to do with the film resulted in a film that broke box office records once again.

After all we have been in the jungle so many times so things were pointing that we would be getting a different setting all together. We get why the creators thought that taking the dinosaurs to a different setting would benefit the film by offering the viewers something new but the point when creating a new film is to put all elements together in order to create a whole that would feel natural and not forced. And here lies in our opinion the biggest flaw of Fallen Kingdom. Dinosaurs don’t fit in an urban environment, period. We got a small taste of that when Spielberg made The Lost World and in our opinion it was a bad movie and a lesson that the creators should remember.

It seems like they didn’t get the message the first time and they went again the same route even if in a little bit different way. In our minds dinosaurs are undoubtedly connected with lush jungles and abandoned facilities. Both the first Jurassic Park and Jurassic World made sure to keep this intact and they both succeeded. Of course this was not the only requirement for success but it was one of the main focuses to help the setting and mood of the films. After the first act of Fallen Kingdom this is completely lost. The urban environment is not helping the mood of the film as we all seek the feeling that a mysterious jungle offers, not the warmness an estate will give us.

The story of the film is not bad, on the contrary we applaud the creators and Trevorrow for taking the franchise into a direction we never thought before. But we cannot believe that there are no other good stories to be told by having the dinosaurs in their natural environment and that the setting was the first thing they would have to change for the direction the trilogy is going into. 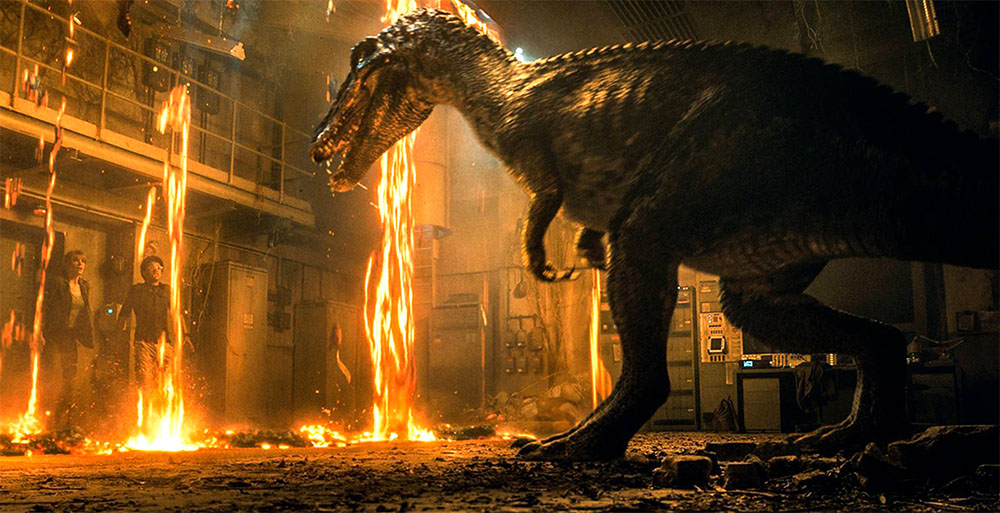 Closing the story we believe that Fallen Kingdom has lost a lot of the magic the previous films had and this was pretty evident on the box office. And while the film still made a lot of money and is considered a huge success it failed to reach the previous film’s box office. It only now remains to be seen where the third film will take us as we for sure enter completely uncharted waters and at least it will be interesting to see what Trevorrow will come up with to wrap up his trilogy.

For the acting not much can be said as once more Chris Pratt and Bryce Dallas Howard return to their familiar roles and perform exceptionally once again. When Treverrow decided on these two actors it was an amazing decision as the chemistry between the two was really unique. And although in the second film we didn’t felt the exact same chemistry between the two as it showed a little bit artificial and forced they still performed admirably and shows that they can still make a great duo that helps the film with their performances.

The rest of the actors did an ok job completing the cast but it was inevitable to compare the cast of Fallen Kingdom with the previous Jurassic World and in this regard this film fails to put all the performances at good use making some of the characters seem funny or borderline idiotic.

Technically the film is perfect and how could this be different when we are talking about such a heavy special effects blockbuster. The pyroclastic volcano wave sequence is one of the film’s highlights and has been front and center in the film’s marketing campaign and although there are a few other memorable moments  this is surely the highlight of the film. CGI landscapes and dinosaurs look good but there are a few moments where the CGI environments look a bit fake.

The sound design follows the on-screen mayhem with a roaring mix that will really immerse you to the world of Fallen Kingdom. What we found particularly interesting is how even subtle environmental and ambient sounds come forth and create a realistic sound field around the viewer. In a film like this naturally you wait for some dino action to get some rumbling sound mayhem but it was the more quiet moments that impressed us with the use of surround audio.

Jurassic Park: Fallen Kingdom is not a bad film, not by a long shot. But the magic of the previous Jurassic World is not here at least during the second half of the film and this has mainly to do with the decision to place dinosaurs in an urban environment. For these animals to look menacing they need to be in their natural environment where man is defenseless and danger hides behind every bush or tree. We cannot believe that there are no other original stories that could be told while keeping this setting that we all loved and grew up seeing these animals in. 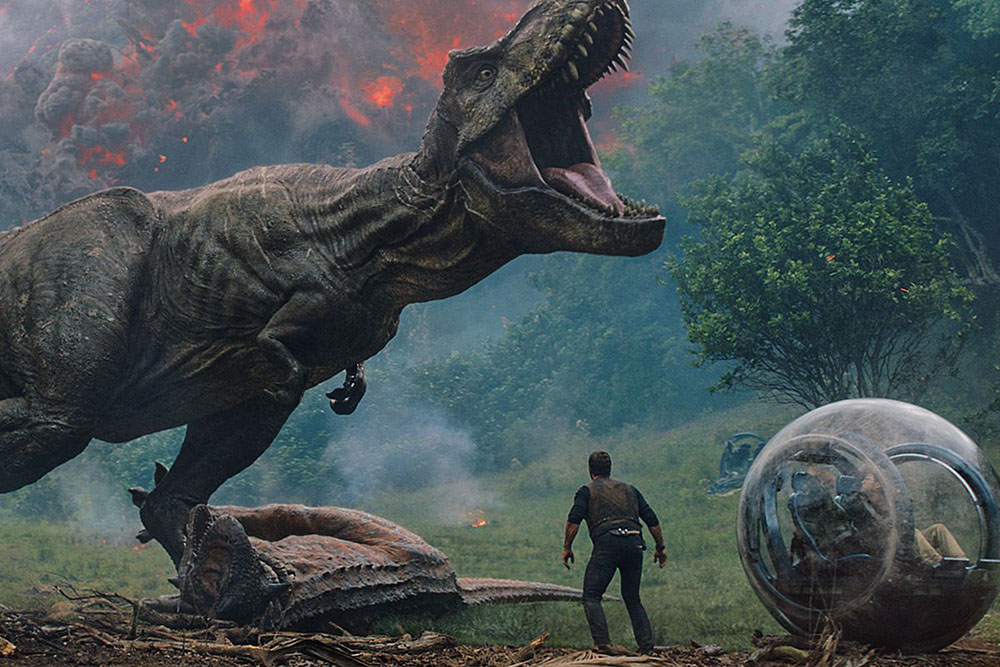 But although we found the change in setting disappointing we are excited to see where Trevorrow will take the franchise with the last film in the trilogy. There are hints of where things are going but remains to be seen where the creators will take it and how far they are willing to take the franchise in their third try. As for Fallen Kingdom it was a missed opportunity and we believe that after the second film the magic is again a bit lost making the next film to have an uphill battle to win the hearts and souls of the audiences once again.

Jurassic World: Fallen Kingdom blasts into the 4K UHD format with a very nice HEVC/H.265 release in 2160p resolution and 2.39:1 aspect ration. The bluray edition of the film offered an already exceptional transfer so we were curious to see how much better the new format can present this visual effects extravaganza. Being a 4K upscale what we see is that there is a visible, even if not dramatic, increase in clarity and sharpness. Texture detail on the dinosaurs skin as well as on the terrain on island Nublar benefit from from the increased resolution giving a more pleasing result. 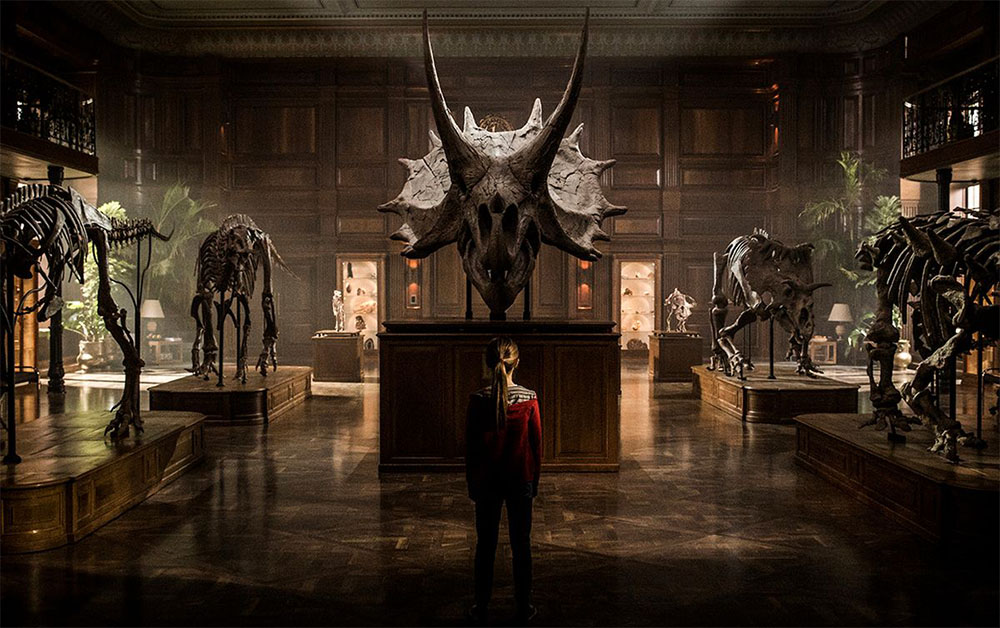 Wide Color Gamut and HDR help to improve the image even further even though it is also not a huge difference from it’s SDR counterpart but it’s enough to make this transfer to offer a more dynamic result. The 4K UHD dic comes with Dolby Vision support for those that have the equipment to support it and the results are really nice. The lush greens of the jungle appear more natural while during the lava sequences the hot red and orange dominates the screen much more than what we saw in the Blu-ray version.

As for the sound, the film comes with a thunderous DTS:X mix that is chaotic but at the same time balanced and well organized. It knows when it has to offer a calm performance with environmental and ambient sounds and when to go all out creating a cinematic cacophony. During the beginning of the film in the underwater scene the mix gives you a sense like you are really at the depth of the ocean while during the jungle sequences you can hear every leaf and every flying bug fill your viewing area. When the action begins and the roars start subwoofers join the party and you only let yourself immerse in this cinematic marvel.

In total the 4K UHD transfer of Jurassic World: Fallen Kingdom offers a nice upgrade over the blu-ray version even if the difference is not very dramatic or visible making this transfer the best one you can enjoy the film with. It may not be exactly reference material but a damn nice result for sure. 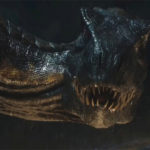 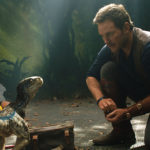 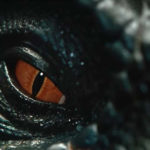 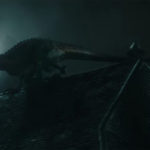