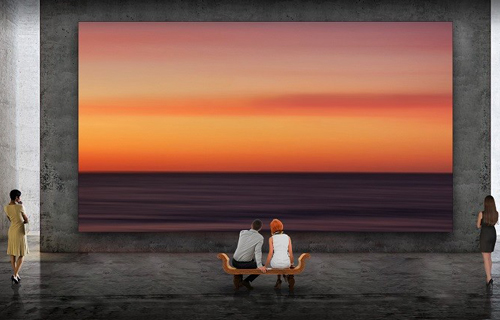 Welcome to our “LED vs LCD TV : Difference Explained” article where we will talk about all the TV technologies that exist today and how to distinguish them. Before flat TVs arrived we were all happy with our CTR TVs that scaled from very small, enough to be even portable to huge ones the size of a fridge. But as time passes by technology improves and there was a time that flat TVs took over the world as LCD technology made it possible to shrink their size to just a fraction of what they were before. 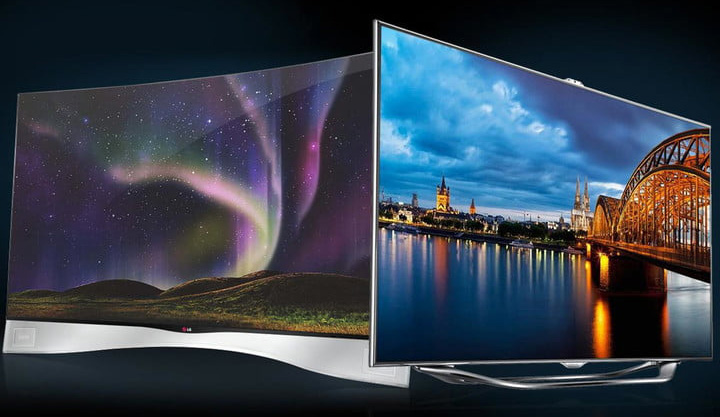 And this brings us today as technology really goes forward and we have reached a point that there are so many acronyms that are there to distinguish these technologies but at the same time add more confusion to the consumers on what is better and what should they buy. Hearing the terms CRT, LED, LCD, QLED, MicroLED and OLED maybe be familiar to those that keep up with new technologies but for the average consumer that just wants to buy a new TV to watch their favorite sports or TV series sound like technology jargon.

The question we hear a lot for some time now is what’s the difference between a LED TV and an LCD one as people see these terms a lot of times individually and they become more confused about which one they should go for. So in this article we will try to analyze the different technologies and try to make it clear in simple terms by pointing the strong and weak points of each one.

A Bit of History

Before we go into the LED vs LCD TV matter we will briefly mention a bit of history. Before flat TVs were invented we used to have CRT TVs which were these huge squarish boxes that some, mostly elderly people, still use. CRT stand for cathode-ray tube which is a vacuum tube that contains one or more electron guns and a phosphorescent screen, and is used to display images. These type of TVs ruled for many years but obviously their size and weight was a huge factor as we went for more inches so the need for a new technology started become more and more obvious.

And the solution to CTR TVs was LCD technology. A liquid crystal panel (LCD) is basically two sheets of polarizing material with a liquid crystal solution between them. Electric current align the crystals and either allow or block the light to pass through in order to get the image. The first LCD TVs were using cold cathode fluorescent lamps (CCFL) to provide the necessary light but this is not the case anymore.

And this bring us today where LED and LCD have become such confusing terms so let’s try to explain it as simple as possible and make it as clear as it can be. Every LED TV is an LCD TV. Basically every TV from the moment they were invented are LCD TVs as they all use a liquid crystal panel. What changes is the type of backlight used. And while the first LCD TVs were using CCFL technology as we mentioned above nowadays they use LEDs to do the exact same job. And in order to distinguish the LCD TVs in this day and age we name them LED LCD TVs. So when you see a description saying that it’s an LCD TV or a LED TV it’s basically one and the same. 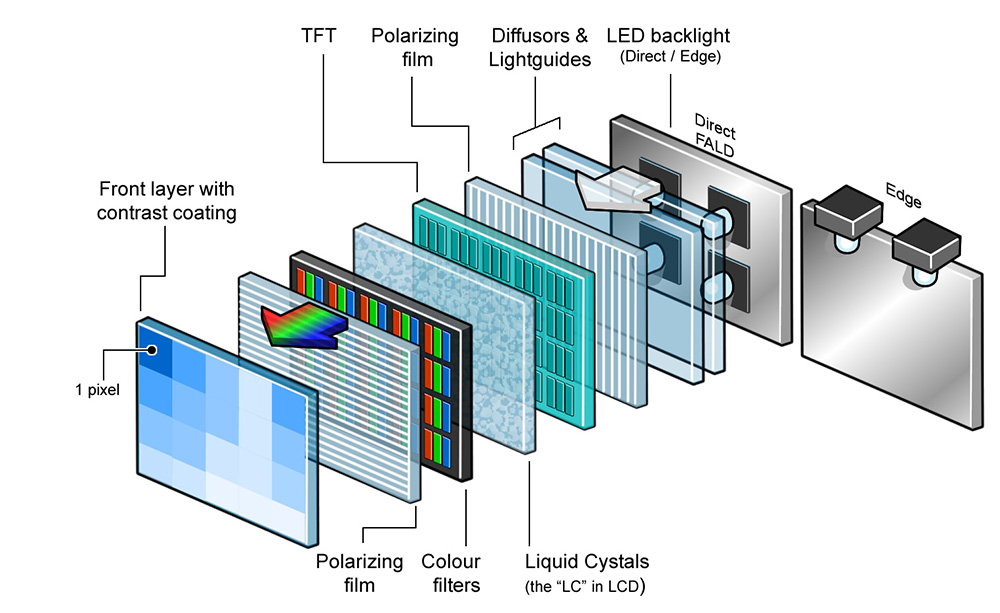 Until today there have been three types of different illumination technologies that have been used in LCD TVs so let’s see them one by one.

As we mentioned above the first generations of flat TVs were using CCFL technology to illuminate the screen and these TVs has a fairly similar illumination across the whole screen. These types of flat TVs were a bit more thick due to the lighting used in comparison to the flat TVs of today. This technology has been abandoned for many years now as it has been substituted with you guessed what…LED.

LED offers better picture and drains less power so going the LED way was obvious from the start. The first of the two technologies that is being used concerning LED illumination is called Edge LED Lighting. This type of technology is usually found in cheaper models of LED LCD TVs and what this basically is are arrays of LEDs across the edges of the TV. There are different type of configurations and each manufacturer choose differently depending on their designs. As such we have arrays at the bottom of the screen, top and bottom, left and right and across all 4 edges. The obvious advantages of this technology has to do mainly with the lower cost and the ability to create very thin models that look great and are easy to wall mount. 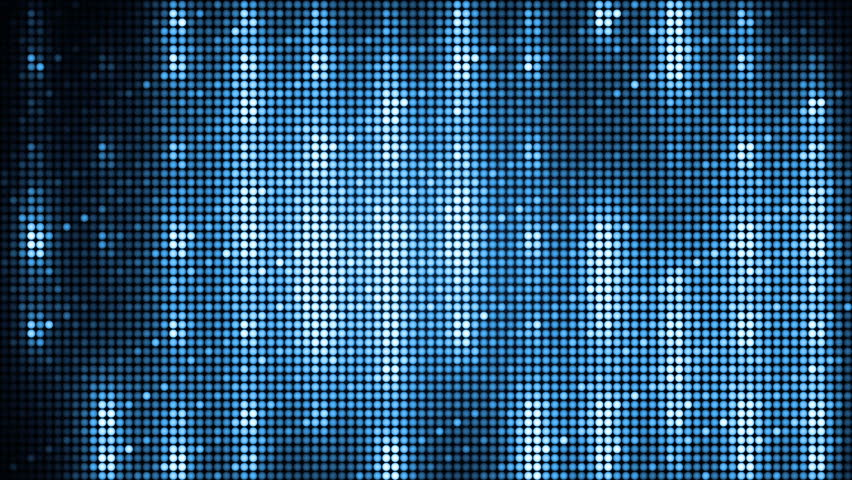 But there are some glaring disadvantages. Having the LEDs on the edge projecting light across to the other side can make the screen show strips of lighter pixels compared to the rest of the screen. This is particular visible when you have a dark screen with a light colored object taking up a small portion of the screen. Also this can create halos around very bright objects as the pixels near the visible object cannot obstruct the light completely.

Another disadvantage is that these TVs suffer from light uniformity. As the lights do not expand evenly across the panel you may see some parts of the screen, mostly on the edges, being brighter than the rest. This may not be obvious all the time but depending on the content this can become apparent and certainly lower the overall image quality.

The most advanced type of LED lighting is called Full-Array Back Lighting with Local Dimming (FALD) and this basically switches the arrays of LEDs across the borders of the screen for a full array that sits behind the panel. Of course not all Full-Array Back Lighting TVs are the same as this type of technology depends very much on the number of LED zones that each manufacturer decides to use for each model. The higher the number the more precise the lighting is. Usually the top tier models have the highest number of LED zones that can reach more than 400 while going down the ladder to cheaper models the number of LED zones decreases and as a result the lighting precision becomes worse. 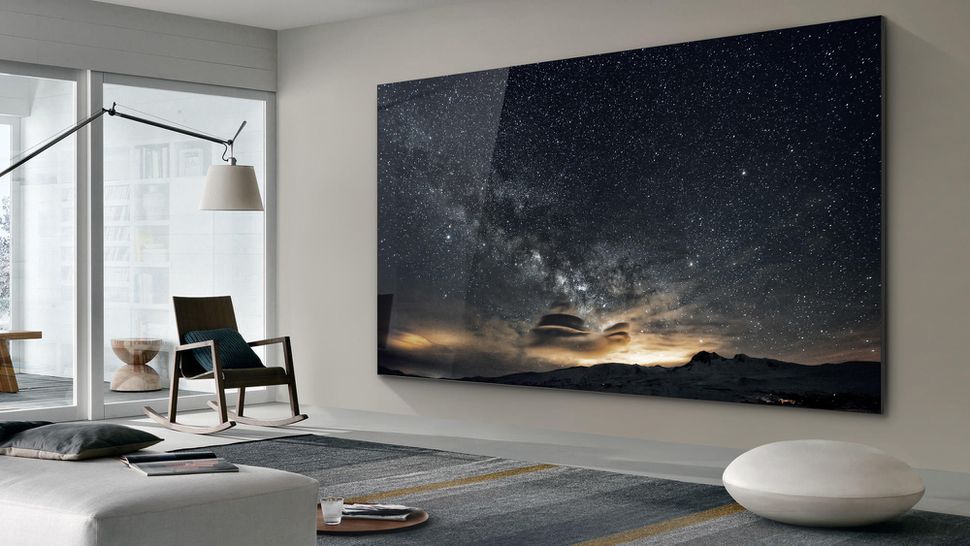 A similar technology with FALD is also Direct LED but in this case the array of LEDs that sit behind the panel has no individual zones that can be dimmed and this can result in less light control over the image. Usually Direct LED systems are used in middle to lower tier TV and some manufacturers tend to prefer this system instead of using an Edge LED system but none of the two is a clear winner as both have advantages and disadvantages.

What about OLED and QLED?

Let’s start with QLED first. In order to combat the increasing popularity LG gained from their OLED production Samsung had to come with an improved technology since they had decided to abandon OLED at least for the time being. And so they came up with QLED which basically is LED LCD TVs, albeit an advanced version of it. QLED TVs use Quantum Dots that act like a filter and improve the TVs performance in various areas like more brightness, better blacks and more accurate colors. LED Backlights emit light that passes through a thin Quantum Dot film layer and is enhanced in order to produce the final result.

QLED technology is better than what traditional LED LCD TVs can offer but at the same time has the exact same problems. Poor viewing angles and problems displaying deep blacks are two of the most obvious as this is a weakness that has to do with the fundamental technology being used and not the problem of some specific manufacturer. 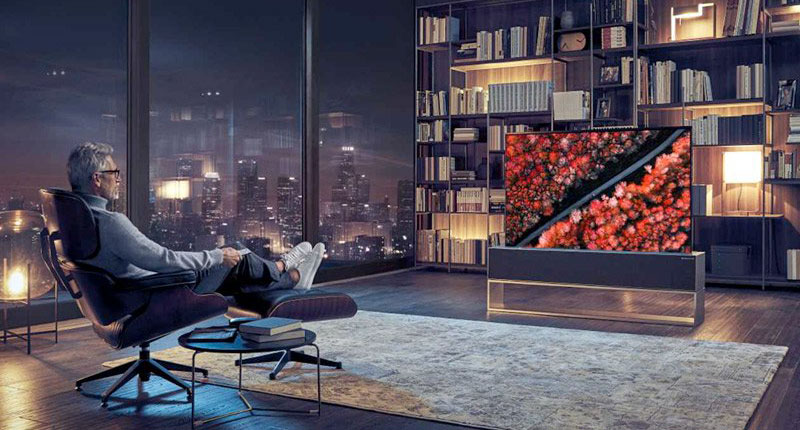 But as good as QLED technology is, it still plays catch-up to what is considered the best TV technology to date called OLED. OLED stands for organic light-emitting diode and with this technology each pixel can light up individually when fed electricity. Because there is no LED Backlight when all pixels turn off the TV appears completely dark and this is one of the biggest advantages of OLED TVs. If you look side by side an OLED and a LED LCD TV showing a black screen the difference can be very obvious as the LCD TV will show dark grey in comparison to completely black of the OLED one. Two more advantages of the OLED technology is wide viewing angles that far exceed what any LCD TV can manage and TVs can be made even thinner than what LCD can produce.

One weakness of OLED TVs is that they cannot be as bright as LCD ones and although improvements on this have been made over the years OLED technology will never be able to produce brightness as intense as LED LCD. But this is not so big of a problem as having so deep blacks compensate the lower peak brightness. 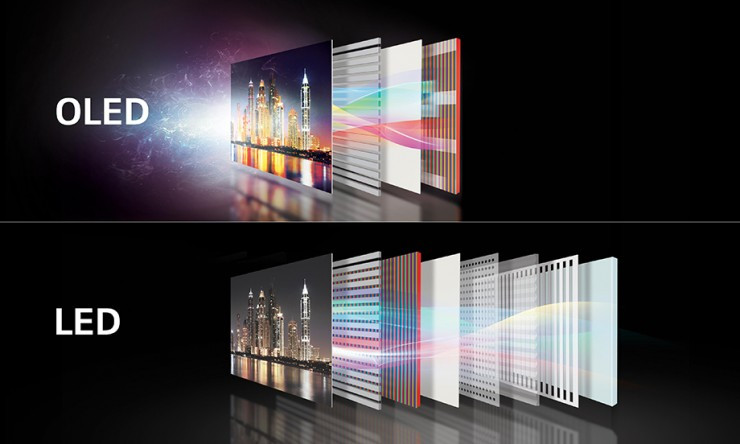 MicroLED for the Future

As you understand from the above, OLED technology seems so much better than the traditional LED LCD one. In order to counter this Samsung developed a new technology that first presented in CES 2018 and they called MicroLED. This technology has all the advantages of OLED like deep blacks, extreme viewing angles and amazing colors but because it does not rely on organic compounds it is not prone to burn-ins, is less expensive than OLED, brighter and can produce even slimmer TVs.

For the time being Samsung has added this tech only to their monstrous 146″ “The Wall” model but during last summer Samsung claimed that they are ready to mass produce it for smaller sizes also. If this technology will manage to steal some of the OLED thunder remains to be seen but all signs are promising and we cannot wait for the first smaller models to test them out. 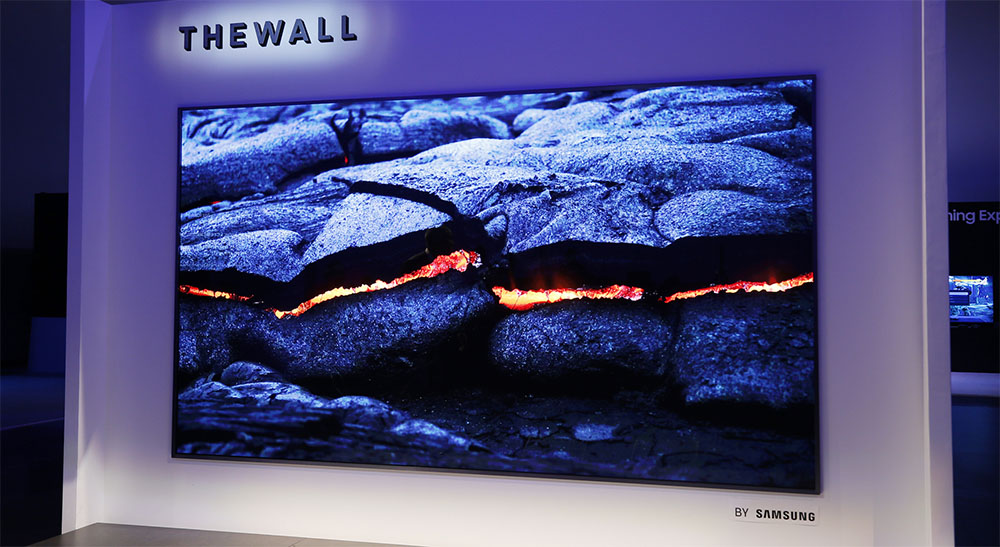 Closing our article today, we will summarize by saying that all LCD TVs should correctly be called LED LCD TVs. If you see only written LED TV or LCD TV be assured that it’s exactly the same thing. QLED TVs are also an advanced version of LED LCD TV while all of them come in three variations by having either Direct LED, Edge LED lighting or Full-Array Back lighting with Local Dimming (FALD) with the last one being usually more expensive but also offers better image quality than the other two.

OLED TVs on the other hand are a completely different technology and usually excel where LCD fails by offering the deepest blacks, amazing colors and excellent viewing angles. On the other hand the new kid on the block called MicroLED is basically an advanced type of OLED which basically will try to delete all the weaknesses that OLED has but keep all it’s advantages at the same time.

Technology moves forward at a crazy pace and this means that new technologies will arise in the future. The goal of reaching even higher brightness, more accurate colors, more deep blacks and higher viewing angles will always be there to push new technologies to their limits. And while we hope we made the distinction of today’s technologies more clear with our analysis, with new tech arriving we will be here to assess and analyze what is best for you, the consumer.

If you plan on buying a new TV set and are unsure what to choose you can check our TV section HERE where we have reviewed a wide range of LED LCD and OLED TVs and soon will be expanded with more 8K TV sets as they become available. Additionally, if you prefer, you can leave your comments or questions below and we will be glad to answer them. 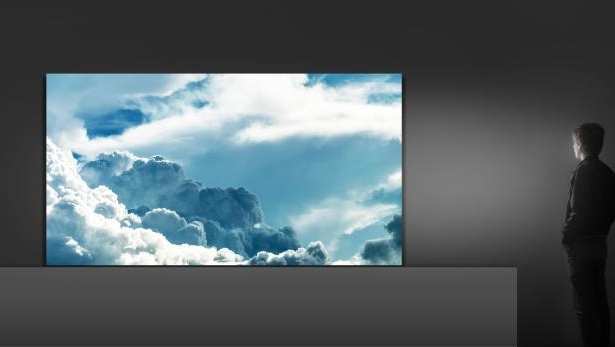