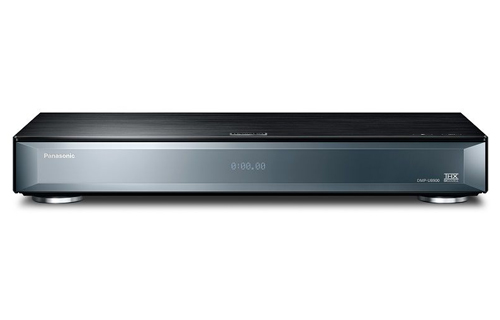 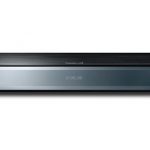 Welcome to another Home Media Entertainment review. Last time we looked into some Home Cinema speakers so this time we will be looking in another vital part of our Home Entertainment Center. The movie player. And for this we decided to look into a player made by Panasonic. Over the years Panasonic has become synonymous with quality products. They may not have the brand strength of Samsung for example but most of the time their products were above average in what they were offering. So when 4K UHD arrived they were one of the first to offer a 4K UHD player to the masses. And so we got the Panasonic UB900 4K UHD Blu ray player. 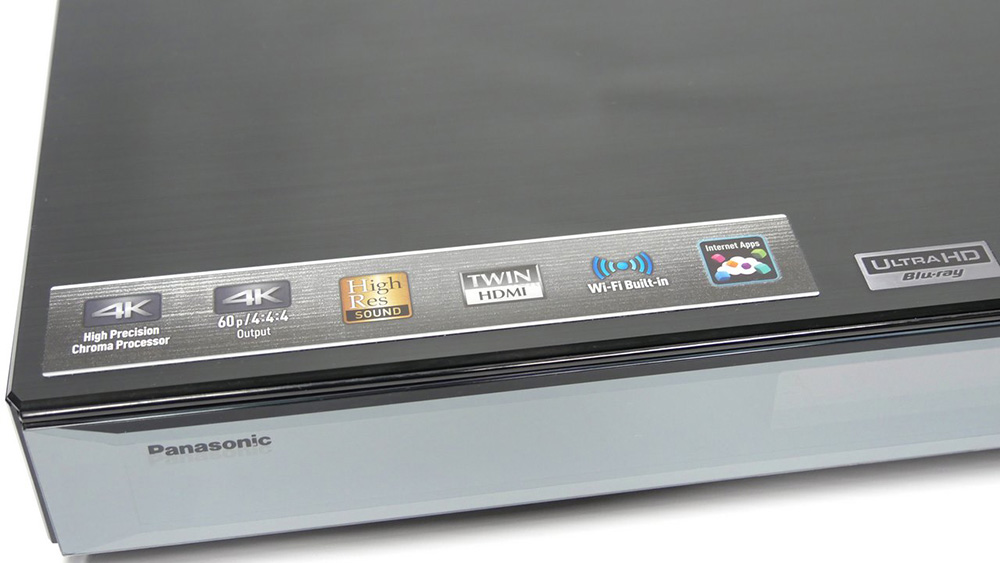 What we have here is a bit of a paradox. Usually when a new format arrives we get equipment good enough to support these new formats. Down the line and when the format matures companies start making better quality products and even top of the line for the more tech fanatics. With the Panasonic 4K UHD Blu ray player they did completely the opposite by offering the best they could at the time of release and later down the line they released UHD players that were still sufficient to play the new formats but were toned down from their top of the line product that even today remains the UB900. A marketing strategy than only Panasonic knows if it really worked on not but for us it is interesting to see a product of such high quality so early in the new format life. At the time of writing Panasonic announced a new top of the line UHD blu ray player with Dolby Vision support so hopefully when it is released we will see what more they can offer.

Panasonic UB900 supports all the new 4K UHD specifications and has received the UHD Premium badge from the UHD Alliance.  In addition it supports all the previous physical disk formats like Blu ray and DVDs. 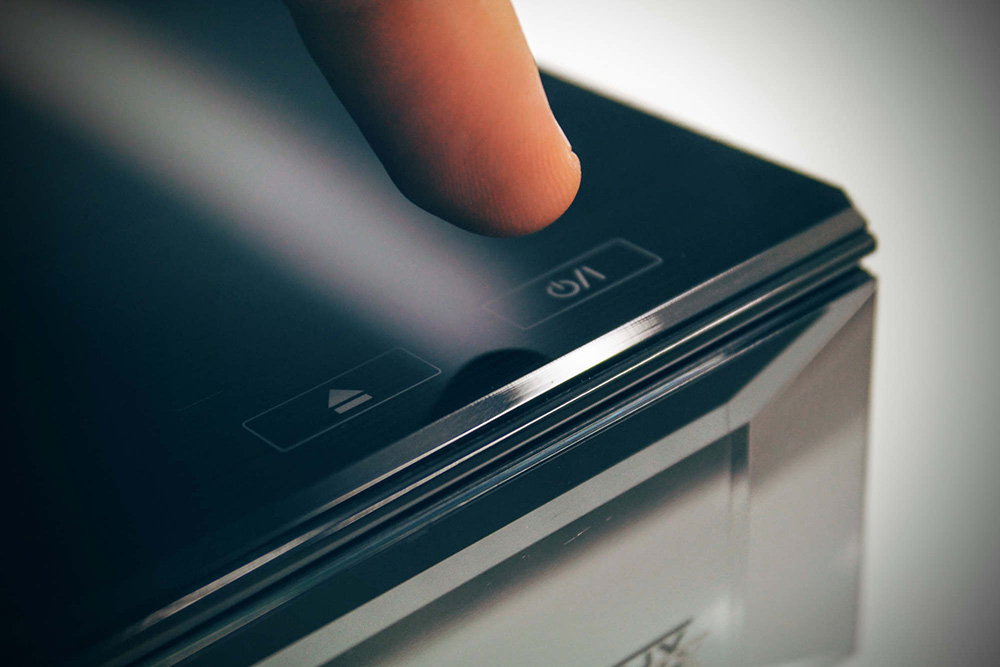 Panasonic went for a very minimalism design by hiding most buttons and inputs. On the top of the player we see two buttons for the opening / closing of the disk tray as well as the on / stand by button. Both of them are touch sensitive. I like what they did with these two buttons but it has the great disadvantage that when you are in low light conditions you are always trying to find them. It would be perfect if they had some kind of illumination so i wouldn’t have to search in the dark to find them.

In the front Panasonic decided to use a full frontal door to cover the disk tray as well as a USB port and a SD Card port. In the middle we have the screen showing the most important information when the player is at work but to tell you the truth i think very few people are looking at this screen and it’s mostly there to show that the player is working.

In all i like that they used a full frontal door to hide everything. When the door is closed in addition with the touch sensitive buttons on the top everything looks in harmony. No buttons sticking out, no port holes showing their ugly face. A very well thought design. 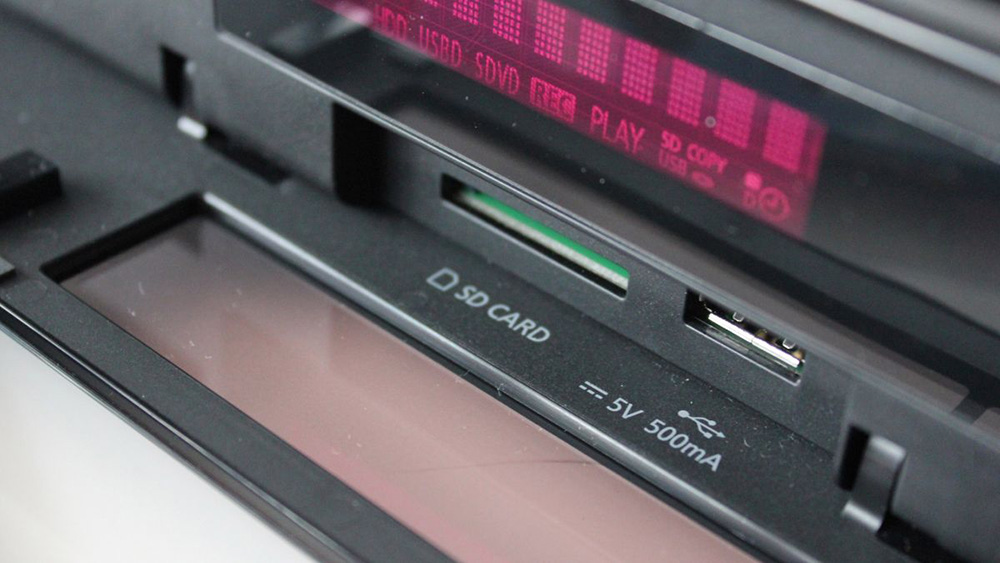 The front ports can be used to connect SD cards and USB drives. I found that the player can play a wide variety of formats for both photos, audio and video files. Of course you shouldn’t expect it to substitute your dedicated media player but it can play a lot of known media types that i tried to throw at it so in any case you have the ability to use it as such if there is a need. By having the front door most of the time closed this helps also to keep these ports dust free which is another plus in the design of the player.

In the back of the player we can see that the designers has included almost every port you could ask for. There is an Ethernet port to connect the player to the internet, also it has dual HDMI out ports, one for video / audio and one dedicated only for audio. This way you have many options how you can connect it to your other devices. The biggest difference you will find here compared to other lower priced players is that we get  2 channel and 7.1 analogue coaxial audio outputs for those that can’t use the HDMI ports for the audio. Last but not least we get both a coaxial and optical audio outputs in case you need these. All in all the back connections leave nothing to be desired and this should be a given with such a premium device.

In the back there is a small fan that works when the player gets hot and i was a bit worry that it would be loud enough to bother during viewing but during all these months that i have used this player i never heard of it so even if it working it is really quiet and not bothersome. Although the device has built in WiFi it doesn’t have an external antenna which I like very much because it keeps the device compact enough.

The remote control of the player is one of the biggest i had ever used. It really has everything you could ask but i am sure most people use very few of the buttons on it. Nevertheless Panasonic offers us a fully featured control and although a bit bulky you couldn’t ask for anything more. It eve

n has a dim button to illuminate the control’s buttons in the dark. With so many buttons it’s a nice feature in order not to press the wrong buttons at the wrong moment and something that I see first time in any kind of remote control showing the attention to detail Panasonic showed.

We also find a Netflix button which is something i am sure many will find useful if you are going to watch your favorite movies through this device.

In general i would prefer a smaller remote control but this is personal taste and with so many functions it is offering i am not complaining. Very good quality overall.

When you open the player it will take you to the main menu from which you can choose what you want to do. As you can see in the photo below you can either choose to watch a movie, listen to music, view photos, connect to your home network and internet and enter the setup where you can find all the calibration menus for the player. The main menu is very simple with no special graphics. I would expect something more from such a premium device but I guess it’s a design decision to keep it simple and functional so it didn’t bother me much. 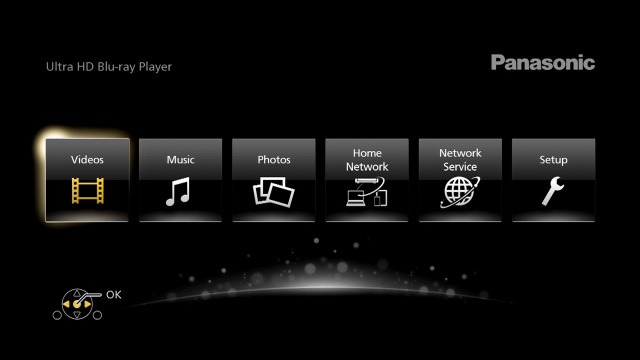 If you enter the setup menu you will find a lot of sub menus from where you can calibrate the HDMI outputs, the picture options, sound outputs, 3D options, the language, Network settings, parental controls and system updates. I would recommend if it is the first time you operate the player to do a system update to the latest firmware as Panasonic has issued a lot of updates the last few months. Updating is done easily and fast without having any troubles no matter how many times i tried it. 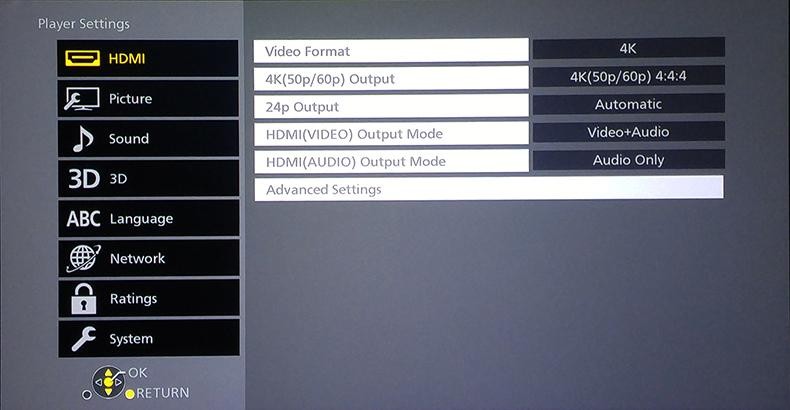 Panasonic is using it’s proprietary new 4K High-Precision Chroma Processor to deliver the best quality possible. As a result we get ultra crisp images and more accurate colors for the best 4K UHD experience. UB900 also has the ability to deliver 12 bit color even though there are no TVs at the moment that can display more than 10 bit. Also it has the ability to detect the capabilities of your TV and adjust the signal accordingly.

UB900 excels in both upscaling HD sources to 4K UHD and downscaling a 4K UHD source to HD or SD capable TVs. The player can also offer 4K signal but without HDR and this is a rare option that although will not be used by many since most want 4K and HDR but there are instances that this is useful and it shows that nothing is left in the air as they tried to include everything they could possible think of. Panasonic engineers have spent a lot of time on how these functions work and the result really shows. I will not go into very tech details because it’s technical mumbling and this is not the point of this review  but i can tell you that what you will get is some of the best conversions you can get out of a device like this. 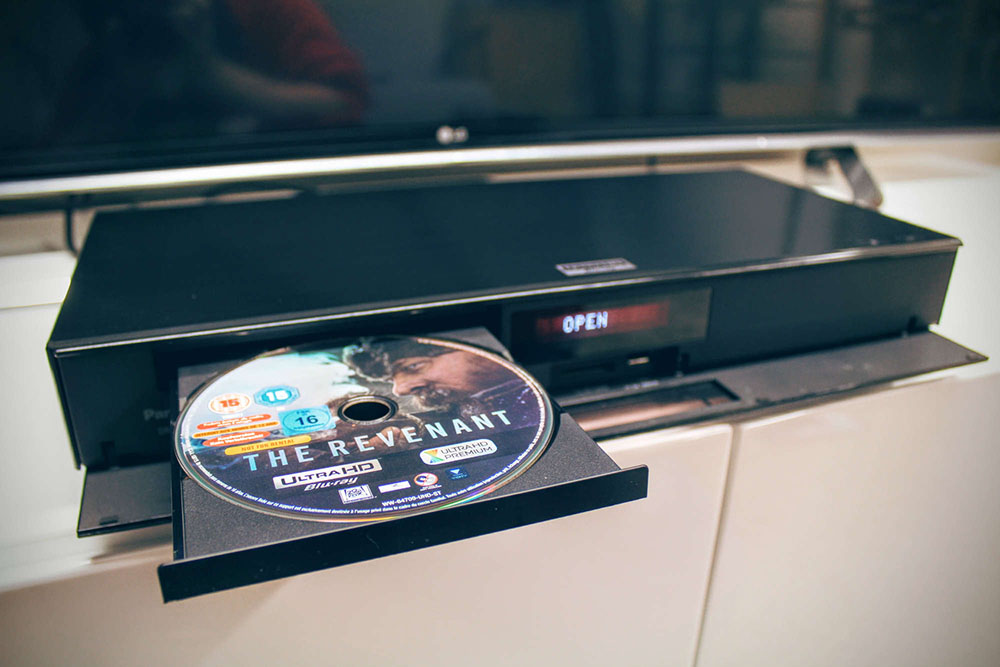 The player has so many video and audio features that you could not really ask for much more. Sharpness and color reproduction is top of the line and makes the images really look alive and 3 dimensional. Audio capabilities may not be so obvious as the video ones but what you get is really top notch. The new audio formats like Dolby Atmos and DTS:X really shine but even if you want to hear low quality MP3s the UB900 is doing a great job in converting them in high quality audio.

Lastly the loading times are good but could be better. Loading a DVD is ultra fast, while blu ray disks take a few seconds more. With 4K UHD it can take a bit more time but it’s not so much to be bothersome. Each disk’s loading time differs but in general the new UHD format is loading the slowest and this is a normal. This is an area that I would really love to see some improvements. I don’t know if it’s hardware or software limitations but it’s something that can definitely be improved.

If you are thinking of jumping into the 4K UHD bandwagon then the Panasonic DMP-UB900 is definitely a must buy. The player is for some time on the market now which means that the price has gone down a bit and the software has improved since Panasonic has updated the firmware a lot of times since the initial release with new features and more stability. Picture quality is astonishing, audio quality is excellent, with a lot of features and functions, and all the connections you could ever need this player is a must have. My highest recommendation.