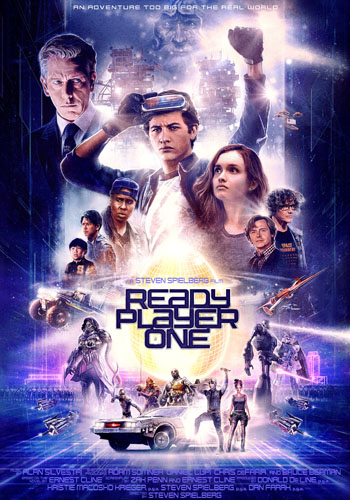 When the creator of a virtual reality world called OASIS dies, he leaves a message that whoever discovers the secret that he has hidden in the virtual world would gain his fortune and total control of OASIS.

In the not too distant future the world has changed for the worse. In 2045 most of humanity spend their time in OASIS, an immersive virtual world, were Wade Watts really feels alive and free to do whatever he wants. Being an Orphan and living with his Aunt in a place called “The Stacks” a place where trailers are structured one on top of the other his only means of escape is this virtual game.

OASIS is a digital world where you can do anything you want, be anyone you dream and go anywhere you desire with imagination being the only limit. It was created by James Halliday, a brilliant but at the same time eccentric engineer who after his death created a three-part contest with the winner promised of taking his whole fortune plus total control of the OASIS virtual world.

For a long time it felt almost impossible that anyone would win but when Wade finds the secret to win the first challenge of this almost rule-bending treasure hunt, he along with his friends, the so called High Five, find themselves in a journey of impossible odds and will put their lives in danger to save the OASIS from IOI (Innovative Online Industries) that wants to take it under it’s control using any means necessary.

Based on Ready Player One by

Every time Steven Spielberg is making a new film is an event by itself. Being in the industry for far more than what I can remember his name is bind with qualities like cinematic excellence and magic as well as breathtaking attention to detail. Of course as with everyone, not all his movies have been a resounding success as he had a few misfires in the past but no one can argue that when looking at his whole career most of his films, without looking at the box office earnings, have a certain quality that is very evident of his way of making films.

Ready Player One is his last work with him being in the director’s chair and in a way one of his previous films, the BFG seems that was a testing ground in combining a digital world with live action scenes. With Ready Player One the formula is the same but Spielberg takes this one step further creating a cinematic spectacle far beyond what the BFG offered and at the same time giving us a very gloomy prospect of how our future could turn many years from now.

The story of the film involves humanity been drawn into a breathtaking virtual world in the not too distant future where you can be anyone you want and do whatever you like without the boundaries and limits of the real world. Thus people have neglected their real lives living in poverty and having lost all will for self improvement with OASIS being their only means of escape. It may not be the most original of stories but what makes it special is that it holds some truth of our reality. Nowadays internet gaming has become almost a plague among younger ages who live their lives through digital avatars killing monsters, aliens and robots most of their time.

Ready Player One in a way shows us how a potential real future could be and it is not far from reality as a lot of elements appearing in the film already exist nowadays even if not in such an exaggerated form as they are depicted in the movie. Avatar creation, online transactions and virtual worlds all exist today although in a more embryonic form. Virtual reality has also been on the rise lately for both computers and consoles and it’s these small details that show where we are heading. Can anyone deny that in the future we will get a unified virtual world like the one in OASIS? Definitely not even if it is presented in a more dramatic way that we may possible get one, but the signs are already here and it only remains to be seen if we will actually get there.

That’s the reason why Ready Player One’s story is so unique. Not because of what the story is but because of the chances of something similar happening in real life and how this film should work as a warning of how our humanity could turn for the worse. Of course in our situation Spielberg made sure to inject this prospect with the right amount of dramatic and visual elements in order to create a story that in one hand has a deeper meaning but also offer plain entertainment for those that just want to spend a good two hours of cinematic entertainment.

Acting is solid and the choice of actors suits the needs of each role. And although both Tye Sheridan as Parzival and Olivia Cooke as Art3mis give very good performances the actor that made the biggest impact was certainly Ben Mendelsohn as Nolan Sorrento giving the central bad guy of the film a really great performance and a worthy and formidable opponent for our main heroes. The rest of the supporting cast was good without distracting from the main action. In general we wouldn’t say that the acting is anything of Academy Awards worthy but Spielberg knows how to handle it’s actors in order to get from them what is needed for the film to work. And here he does exactly that.

As for the technical side the film excels in all aspects. It is more than evident that realism was never a goal with the virtual world of OASIS but being Spielberg it could not but be presented in a very spectacular and visual way. OASIS is full of tiny details and although it is evident of being fake it makes it look so good and pleasing that you would definitely want to get a taste of this virtual world. There is an abundance of action filled, CGI driven scenes throughout the film and each set piece is better than the previous with the culmination coming during the major battle sequence during the ending of the film.

Music and sound design is marvelous and really accompanies the film masterfully and gives a better sense for each scene either it is a calm scene with small ambient sounds or it is one the many action sequences where surround effects come from all directions and throw you in the dead center of the action.

In total Ready Player One has all the characteristics of a classic Steven Spielberg film. It has an interesting story that will keep everyone entertained but at the same time tries to pass a deeper message and a warning we would say, of where our society is heading as technology becomes better everyday. It has some great actors that give very good performances and of course in classic Steven Spielberg way it offers an amazing world full of fantasy, action and thrilling moments that will keep you on the edge of your seat until the very end. Spielberg may be getting old but his craft is not and Ready Player One is the evidence. Highly recommended.

Ready Player One arrives in a 2160p, HEVC / H.265-encoded UHD disc and while it’s digital intermediate (DI) was finished in 2K the digital parts of the film were rendered in 2.8K while the live action parts were shot on film. The result we get from getting the film in 4K may not be a huge improvement over what we got on Blu-ray as that transfer was already good enough but the improvements we can admit in some instances can be more than subtle and this has to do with everything the new format offers.

The increase in resolution offers higher clarity throughout the film with the most apparent improvements being when we are in the digital world. The grid-like pattern that is very characteristic of Parzival’s face is one example where the extra resolution offers more image clarity and as a result more details are revealed. During the live action scenes the higher resolution reveals a spectacular grain structure.

Wide Color Gamut and 12-bit Dolby Vision on offer in the UHD create more pronounced and lifelike colors while black colors become really deep without ever reaching crushing levels. Highlights are more pronounced and with a movie like this there are ample of glowing parts, lens flares and shining objects making Dolby Vision really helping with the overall improvement of the image quality.

As for the audio track the Dolby Atmos on offer is a marvel to hear. The material of course helps to create a breathtaking audio experience especially in the virtual world of OASIS where there is an abundance of environmental and surround sound effects in every scene. When action starts the speakers go into overdrive and the sound field expands in all directions creating an immersive sound field all around the viewer. The battle in the final act is almost of reference quality and really keep you drawn to the picture with the amount of audio information being offered. In more calm scenes dialogue is very clear and pronounced creating a great balance between the center speakers and it’s surround sounds.

In total the UHD offers a clear if not a substantial improvement over it’s bluray encoding offering better image quality with improved clarity, more vivid colors and more pronounced highlights while the Dolby Atmos audio track will really suck you in the action until the very end. Thus the UHD offering is the best for home viewing and one that will certainly keep you the most entertained. 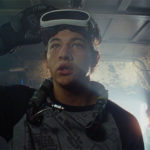 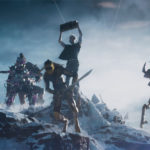 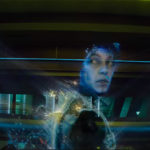 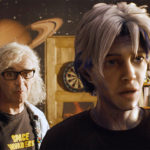