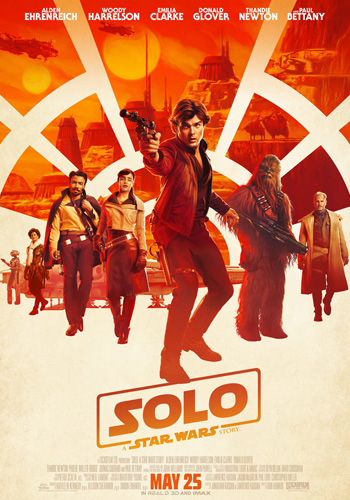 This is the story of Han Solo during his time in the criminal underworld and how he met his mighty wookiee co-pilot, Chewbacca and charming smuggler Lando Calrissian a long time before joining the rebellion.

During the early years of the First Galactic Empire Han is trying to find a way out of Corellia with his girlfriend Qi’ra and while he manages to escape by bribing an Imperial officer she is captured by the worms. Han enlists as an Empire pilot but three years later he ends up fighting in Mimban as an Imperial infantryman where he meets Tobias Beckett, Val, and Rio, three thieves posing as fighters and asks to join them but they refuse and he ends in a mud pit where he meets Chewbacca. The two escape and Rio manages to convince Tobias to take the two with them while leaving on a ship.

While resting on planet Vandor Beckett tell them that they plan to steal hyperfuel called coaxium from a train. During the heist Val and Rio die while the group is being attacked by Cloud Riders that try to steal the cargo. The train falls of it’s tracks and Han drops the coaxium which creates a huge explosion. Beckett, Han and Chewie go to Dryden Vos to explain the failure while suggesting stealing coaxium from planet Kessel. Dryden has Qi’ra join them who takes them to Lando Calrissian who has a ship that can take them to Kessel.

After managing to steal the coaxium from the mines by starting a riot the group is found by a star destroyer and while trying to escape a cluster of black holes they use a portion of coaxium to escape and make Han brag that he made the Kessel run in 12 parsecs. On planet Savareen while waiting to meet Dryden they are found by the Cloud Riders that reveal themselves as the start of the rebellion that wants to keep the hyperfuel for the fight. After Beckett betrays them Han kills him during their confrontation while  Qi’ra kills Dryden and takes his place while contacting her boss that is revealed to be Darth Maul.

Han plays another game of cards with Lando in which he manages to win, thus winning the Millennium Falcon and along with Chewie they plan to go to Tatooine for another job.

Finally the film everyone has been waiting for is here with the Solo: A Star Wars Story blasting it’s way to physical media. Since Disney had announced they would be producing standalone films in the Star Wars universe in the likes of Rogue One and a Han Solo film everyone has been waiting to see the story of the most famous smuggler in the Star Wars universe and one of the most recognizable characters in the movie industry.

Now that the film is out and into our homes and the dust has settled down it’s easier to see how this was a troubled production from the beginning. Going through a change of directors during the middle of production meant that something seriously wrong was going on. Reports say that there were directional differences and when finally Ron Howard took the helm he changed almost 70% of the final film. When a movie goes through such drastic changes it means only bad things as usually it looses cohesion and the story turns into an unimaginable mess. So how did it really fair? Was it the disaster many claimed it to be or bad reputation was a little bit overblown? 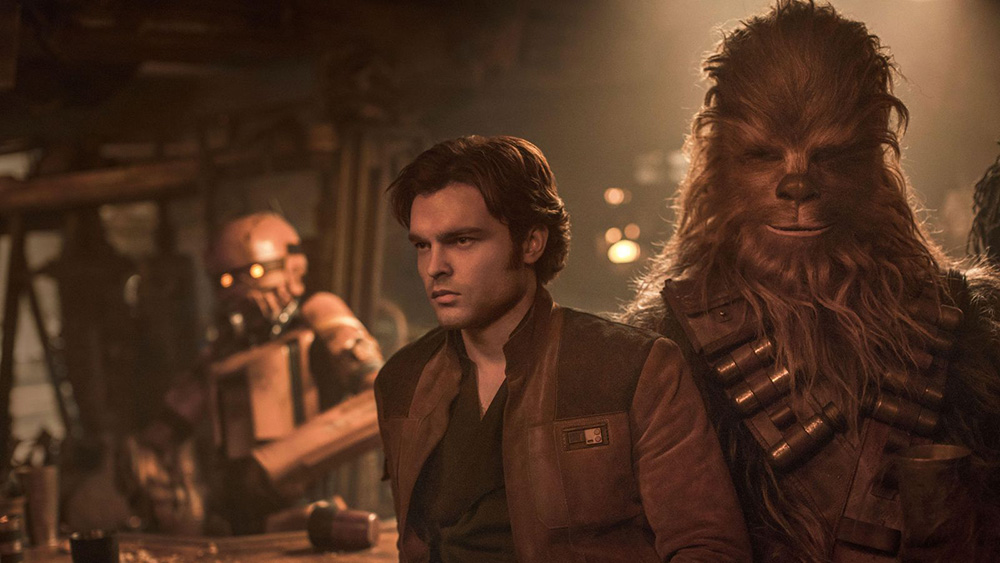 In real life they say that the truth is somewhere in between and this holds true with Solo. The developers decided to tell the story of our famous smuggler in his early years before Solo and Chewbacca become a powerful duo and before Solo gets his famous ship, the Millennium Falcon. And if Rogue One was immediately connected to the main cannon story and we knew how it would end, taking the Solo film so many years earlier gave them the freedom to go into uncharted territory and tell a story that was not restricted to any cannon story we knew so far.

And here lies the first pitfall the developers went into. But having more freedom this means they can end it any way they want. But this is supposed to be good, right? It is when you decide to finish the story you are telling and while they gave some closure they decided to leave the fate of some characters up in the air. This was obviously a way for the developers to leave the door open for a potential sequel as this was bound to be the beginning of a new franchise. But the risk this brings is that if the film under-performs then we are left with a movie that offers no closure to the story being told.

And this is exactly what happened here. Reportedly costing around $300 millions to produce the Solo film was one of the most expensive films made and unfortunately the returns were so much lower than expectations that reports say Disney is bound to loose tens of millions due to under-performance leaving the potential sequel in serious trouble.

But having no real closure is not the only problem of the film. Having such a gargantuan production cost you would expect it to feature amazing battles and action sequences that would hold you on the edge of your seat until the credits roll. Unfortunately this is not the case. The film has it’s moments, the most obvious ones are the train heist and the Kessel run but in total it felt like a lot of money spent didn’t show on screen. Even the few action sequences that were there felt boring and uninspiring like the Kessel mines riot that felt like an action sequence from a television series. Very constrained, uninspiring and a bit boring.

One thing that we admit they managed to get right is the casting. Alden Ehrenreich as the young Han Solo manages to catch the cocky character of our famous smuggler that Harisson Ford managed to have in the previous films. On the other hand Emilia Clarke as Qi’ra was a blank character so it was easier for her to inject some new personality to an unknown character. But the character that impressed us the most, even more than Ehrenreich and Clarke, was Donald Glover as the young Lando Calrissian. Glover managed to depict the character amazingly close to the way Billy Dee Williams did so many years ago. You could see small details in his character behavior that will bring you back memories of the way old Lando was behaving through the old films.

The only character that we felt under-performed was the droid L3-37 as Lando’s favorite droid. It was clear that they tried to create another successful droid character as they did with K-2SO in the Rogue One film. Unfortunately while K-2SO’s character was spot on L3-37 felt very unnatural and in a way they tried to create something similar that in the end failed miserably. More than once we rolled our eyes with the behavior it depicted and usually when this happens it’s not for good. This was the only misstep in an otherwise solid casting performance.

Technically the film is excellent and this was to be expected with such a high profile production. CGI and special effects are very good although some CGI landscapes felt artificial and fake, while photography was great as some scenes will leave you in awe. Music wise they tried to blend new and old rhythms as John Powell’s score used parts of John Williams Star Wars themes but at the same time injected it with fresh notes to make it feel like new.

Closing we would like to say that Solo: A Star Wars Story felt like a huge missed opportunity. The characters were there, the world is set and the only thing missing was a good story combined with great action that would guarantee success. With Rogue One they managed to succeed even if it was a more difficult project since they had to finish the film in a specific way that would tie exactly with how Episode IV: A New Hope started. With Solo unfortunately they missed the mark by far and thus the end result is highly forgettable. The Last Jedi was a film that also draw a lot of criticism from almost everyone but it had it’s moments and action sequences that everyone will remember. On the contrary the Solo film is highly forgettable on almost every aspect and maybe it’s better to stay that way in order to keep all the fond memories of our favorite smuggler that Harisson Ford gave us in all the previous films.

Solo: A Star Wars Story blasts into 4K UHD with a HEVC / H.265 release in 2160p resolution and 2.39:1 aspect ratio. What made a big impression to us was how dark the film was overall and even during scenes that were suppose to be more bright overall like the train heist appear more bleak with grey skies and snow that doesn’t have the intensity you would expect. Another scene is during the mud pit where Solo meats Chewbacca for the first time. What would be an understandably a low light environment becomes more dark than it should. You would think that HDR would help to brighten things up a bit but although it offers more solid colors it never manages to show it’s true capabilities as we have seen in other releases.

One problem we encountered was that in a few scenes we saw macroblocking which for a format like UHD is unacceptable. It certainly is not a format problem and it has to do with some mistake in the transfer and we honestly cannot believe how such a thing past through quality control especially when we are talking about such a high profile film. Nevertheless 4K resolution offer a rather modest upgrade in overall sharpness although it’s nothing major to talk about. Some scenes benefit more than others while in some you will be hard to find any differences from the Blu-ray version. Being a dark film doesn’t help details to pop out very much so whatever improvement is there, is hard to notice.

The UHD disc comes with a Dolby Atmos track that may not be the most impressing one that you have heard but it manages to hold it’s own with a very balanced mix. Overhead speakers are used mostly in specific scenes and add an extra layer of detail like during the train heist or the maelstrom scene. Surround effects are plenty with laser fire and spaceships flying all around providing a very immersive soundstage around the viewer. Low frequencies are plenty like in the planet battle scene and although it will not make your subwoofer work overtime, when it is needed the track provides the necessary oomph. The center speaker is not as clear as we would like and sometimes during action scenes that surround effects take center stage, dialogue intermixes a bit making it less audible than what we would like.

The film is so and so and it’s as if the UHD release follows the same pattern. It is not bad, not by far, but when we have seen the capabilities of the format the result we see with the Solo film is a bit underwhelming. What could have been a spectacular release at least on the technical aspect what we get is a rather forgettable edition that although has it’s advantages with more details due to higher resolution, tighter colors with the help of HDR and a more spherical Dolby Atmos track it fails to rise to levels that would classify it as reference material. 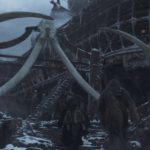 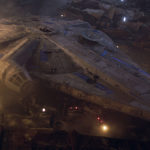 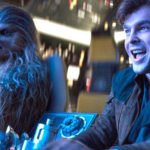 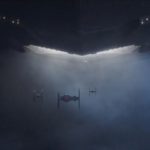