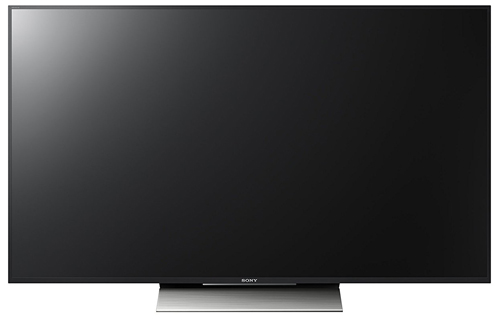 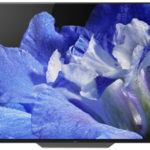 The Sony A8F is bound to be one of the best TVs you can buy in 2018. Hardware wise it not anything new as it uses the same hardware from last year but this does not stop it from offering top rated specifications that very few TVs can offer in this range. The A8F is basically the same model as the top of the line Sony A1 but with a different stand. Gone is the angled position of the A1 that could make some people dislike it and now we get a more standard vertical position. Everything else seem to be the same specifications so let’s see what is there on offer in this Sony A8F review… 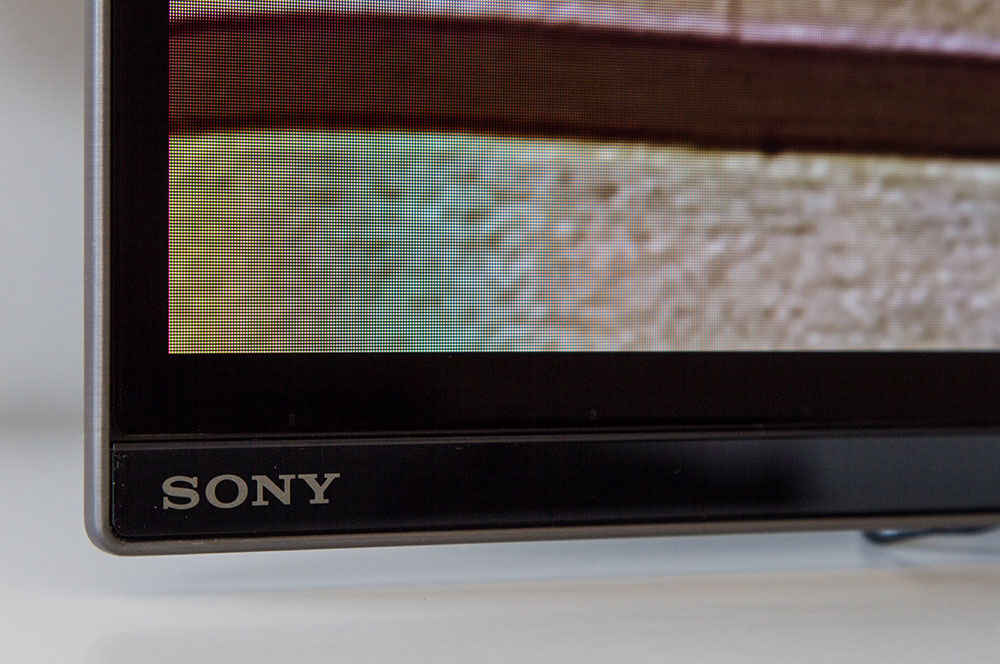 The model we are reviewing is the 55″ Sony A8F OLED 4K UHD TV. The front of the TV is fairly basic having a very thin metallic frame around the bezel that looks pretty good. It also has a very basic rectangle stand if you want to position it on some furniture. The OLED panel is very thin except from the middle where the electronics box houses all the ports and brains of the TV. The connection ports face towards either down or to the side of the TV. Sony has added big compartments that are covered with plastic panels in order to hide the connectors. For this price range the plastic feels a bit cheap to tell you the truth but I am nitpicking here since most of the time this is hidden behind the TV.

The electronics box in the middle not only houses the brain and connectors of the TV but also the unique sound system. Sony calls it Acoustic Surface speaker and it uses two actuators in the back of the TV that vibrate and create sound giving you the impression that sound comes from all the screen. These two actuators are placed to the left and right side of the TV to create the left/right stereo perspective. In the middle they have placed two small subwoofers for the bass. For those with dedicated sound systems it may not mean a lot but the truth is that it’s a unique system that you need to hear to believe. Kudos to Sony for trying something different than what is the standard for TV sound design. 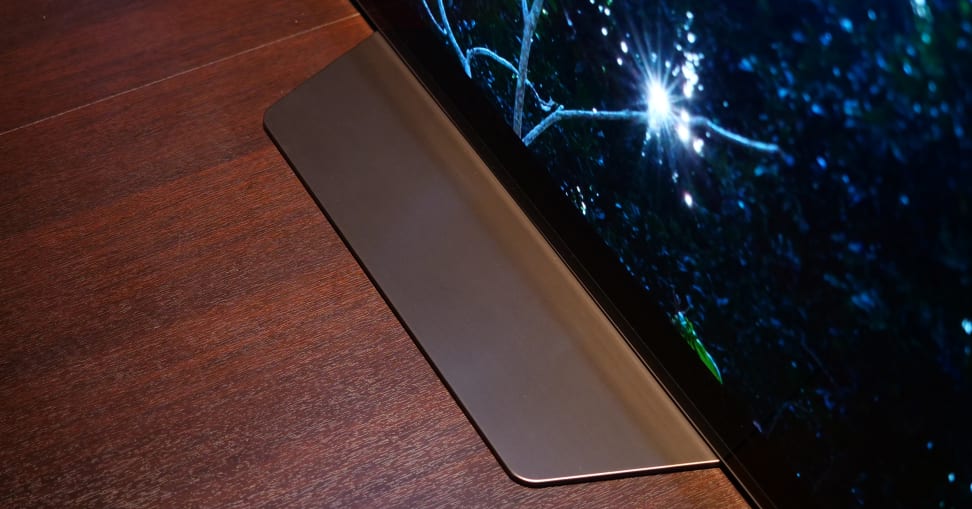 Here is the most juicy part of the whole interview. The Sony A8F is using tech from last year’s A1 so lets see how it fairs. As far as peak brightness things seem to be a bit better than last year hovering around 750 nits. This number may not be very exciting compared to some LED LCD TVs but don’t forget that OLED technology always trailed behind in this aspect. But every year they seem to improve on this and this makes things more exciting for the future. 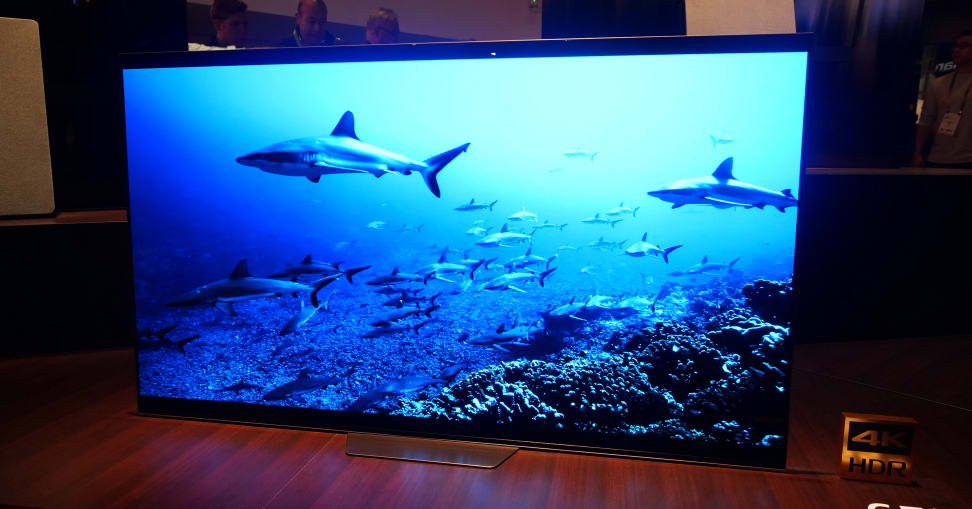 As with all OLED panels the contrast ration is amazing. When producing true black colors the LED lights turn completely off and this creates an image that must be seen to be believed. If you are used to watch LCD TVs it may seem a bit strange at the beginning but the effect is truly mind blowing. Another strength of OLED technology is wide viewing angles. With LCD TVs the HDR effect is diminishing when you are not sitting at the correct spot, the Sony A8F excels on this also delivering an excellent 4K image with HDR without loosing any image quality up to 75 degrees in angle. The HDR formats that are being supported are HDR10 and HLG for the moment as Dolby Vision has been promised in the future by firmware update.

As far as color performance we get also excellent results. The TV can produce around 95% of the DCI-P3 color space. For Rec 2020 measurements were around the 70-75% range color reproduction. Tests showed smooth color gradients without any visible banding. As far as motion handling the TV also gives us excellent results and with the Motion Flow option you can calibrate the TV to your liking. Sony’s X1 Extreme Processor in combination with the OLED panel give us some of the best motion performance you can get from and OLED nowadays. 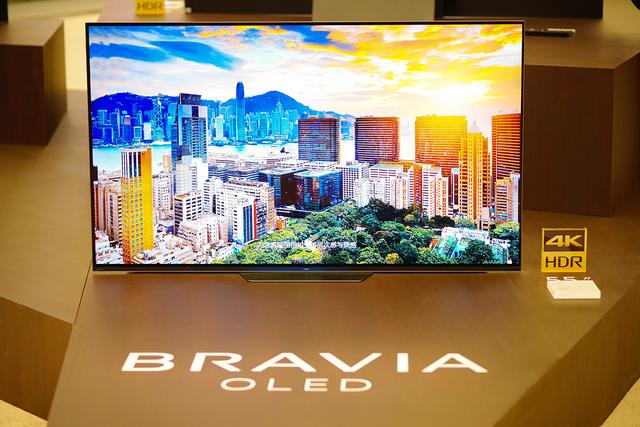 Upscaling SD content to 4K and SDR to HDR could not be any better and this shows the strength of the X1 Extreme Processor. Input Lag in Game mode hovers around 40ms which is not bad but not great either. In Cinema mode lag spikes over 100ms so if you consider gaming then make sure to use the Game mode.

In total I could not be more excited about the image quality of the Sony A8F. Improved brightness, great color gamut, excellent HDR, good viewing angles and great motion performance creates an amazing experience. Sony’s X1 Extreme Processor shows it’s strength and only input lag could be a bit better. When Dolby Vision support is added then it will be almost perfect.

All inputs are placed on the back of the TV with some of them looking towards the side while others looking down. All of them are covered by a plastic panel that hides some of them connectors although it doesn’t do much to cover the bulk of the cables coming out of the TV. I really prefer the Samsung way that offers a separate box for all the connectors instead of having to connect everything on the TV. A TV box can be hidden, these cables cannot so if you prefer to wall mount the TV hiding the cables can be a trouble. 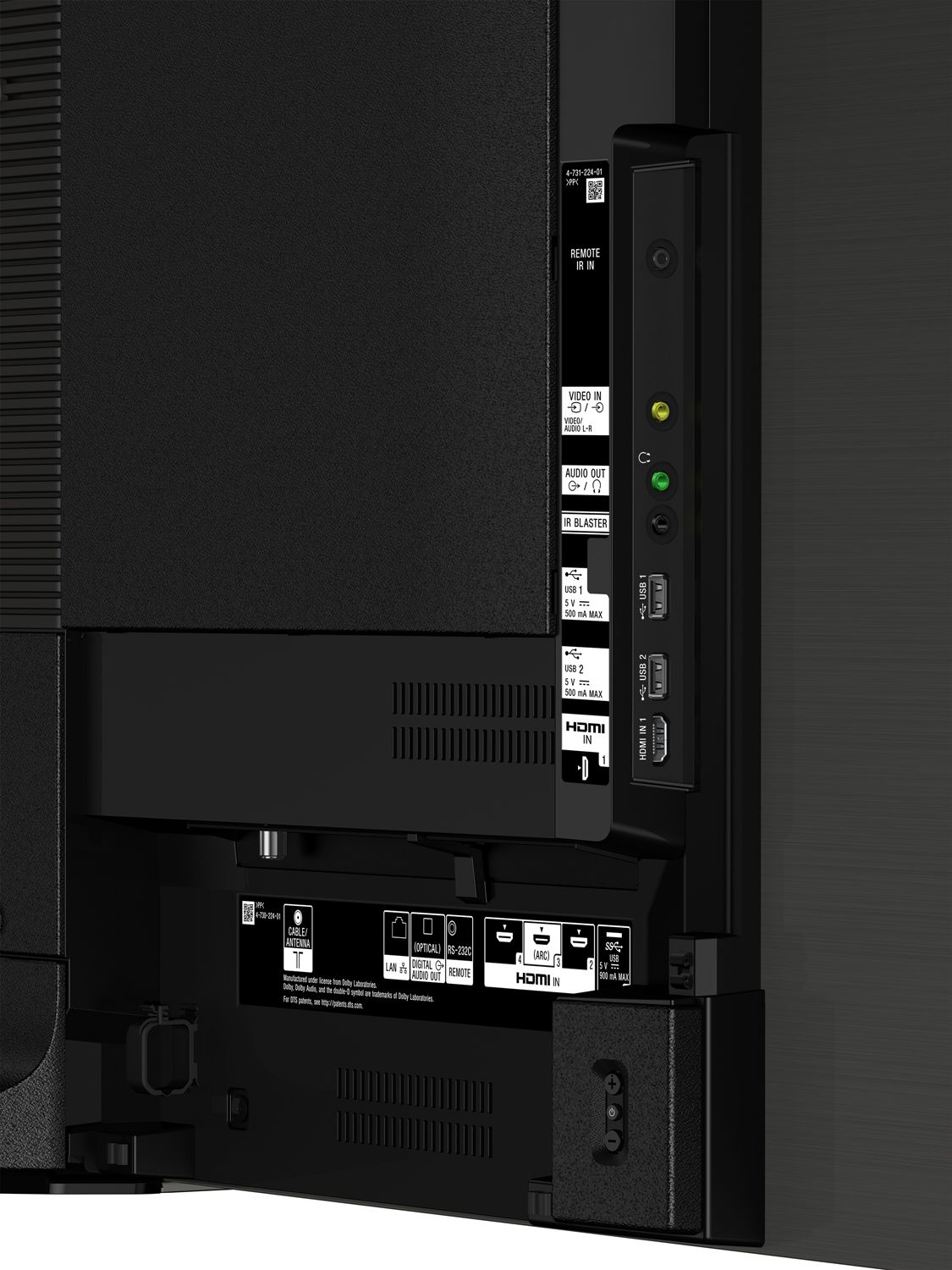 For the side connectors we get one HDMI IN, two USB ports, an AV IN and an AUDIO OUT port. For the ports looking down we get another USB port, three HDMI ports with one of them supporting ARC, an optical port, an Ethernet port if you prefer wired connection to the internet as well as Terrestrial and Cable connectors. In general what you get is everything you would need for all your basic connections. Nothing special here but very adequate number of connections offered.

The Sony A8F uses Android 7.0 as it’s OS. Sony has promised an update to version 8.0 at some point and it only remains to be seen when exactly this will happen. At first it may be a bit overwhelming until you learn where each menu is but after a while it becomes second nature. The user interface is divided in 3 rows with the first showing recommended apps, the second row showing Sony’s apps and the third row showing third party apps of your choice. 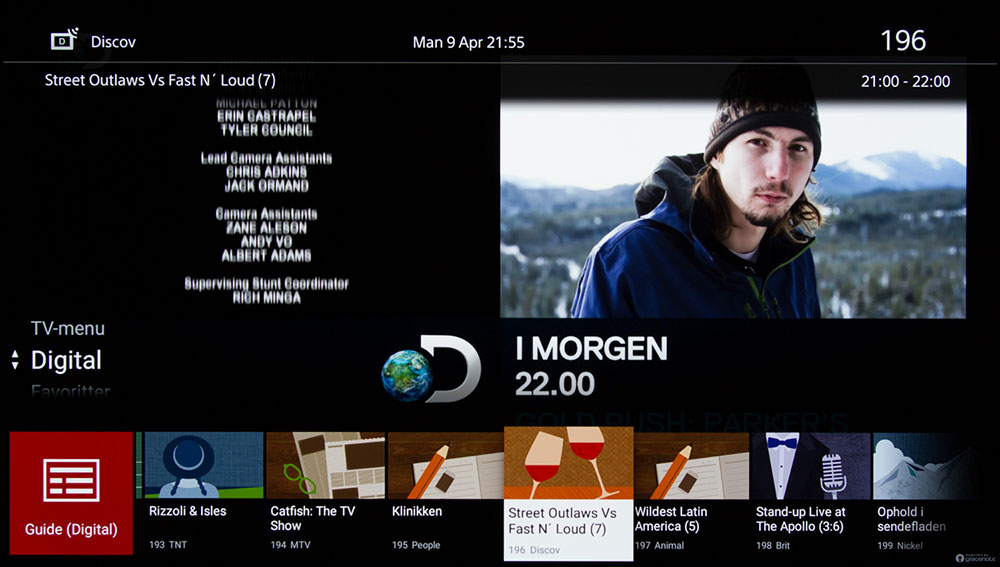 There is also a row for android games but really who play games on their TV? In the last row there are the various input options as well as streaming services and channels. The TV also offer Chromecast support. The Discover menu that has been applied on top of the Android UI give you access to the TV channels, inputs, recordings and apps. The TV may be powered by the new X1 Extreme processor but the Android part is still being powered by a 2016 MediaTek 5891 SoC and the experience is some times underwhelming. Although I didn’t experience any major lag navigating through the menus, the Android OS never feels very smooth. For a top tier TV this is unforgiving to tell you the truth. 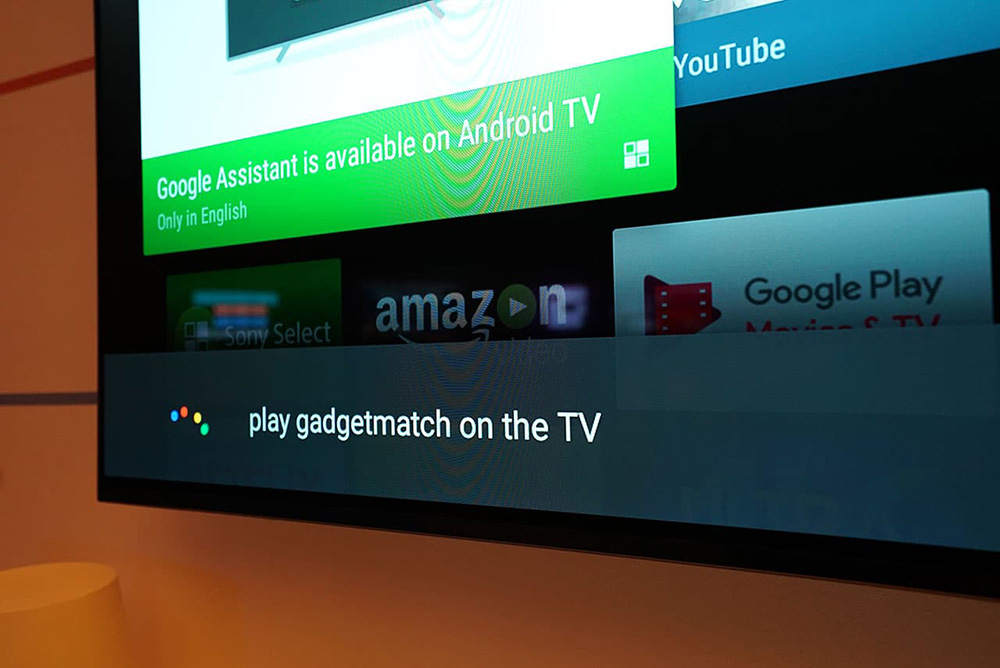 The remote control was a major let down especially if you consider the offerings of other TV manufacturers for their top tier models. It really feels not only cheap but also like it belongs to a 2010 TV. Sony must reconsider the design of their remotes if they want to stay in the game. The buttons are a mess and the funny thing is that there are two buttons, the TV and Home button that both of them activate similar shortcuts to apps, inputs, recordings and HDMI sources. The voice button at the top is the only Bluetooth activated button and everything else rely on traditional infrared which is a bit bizarre. In general Sony has to redesign their remote from the beginning because this one offers more frustration than control and it’s a pity when we are talking about such a top quality electronic device.

The Sony A8F which in Europe is called AF8 is really a great TV. It’s OLED panel that comes in two variations of 55″ and 65″ offers spectacular image quality and breathtaking HDR. Sony’s video processing is a step up from previous models and will be reference for any future models. Sony has promised Dolby Vision through a future firmware update so this remains to be seen when we will get that. We also get Sony’s Acoustic Surface speaker system which is really innovative and different from anything we have seen before.

On the opposite side we get Android 7.0 powered by the same old MediaTek SoC which leaves a lot to be desired. Also the remote control feels cheap and old style for such a top tier TV.

The A8F is a really great TV and it’s image quality is top notch but a few drawbacks like the Android OS and the clunky remote deprive it from being  almost perfect. Nevertheless what you get here is without a doubt one of the best TVs for 2018 and a reference for any future top tier TVs we will see. Highly recommended. 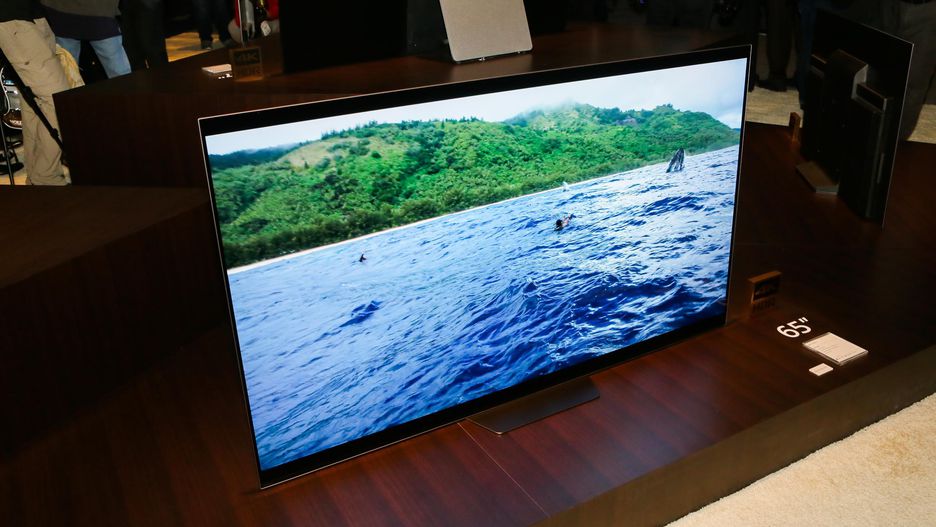